Dixie State University students braved the wind and lines to voice their opinion in the Utah state caucuses Tuesday.

DSU students were among the hundreds of thousands of Utah voters who showed up to vote in the caucuses. Record voter numbers across the state turnout caused long lines, delays and some caucus locations to run out of ballots. The night ended with Bernie Sanders winning with the Democrat vote and Ted Cruz winning on the Republican side.

“It’s a little sad to see all the college students go vote for Democrats,” Harrison said. “Bernie Sanders probably attracts a lot of [students] because of his promise for free college.” 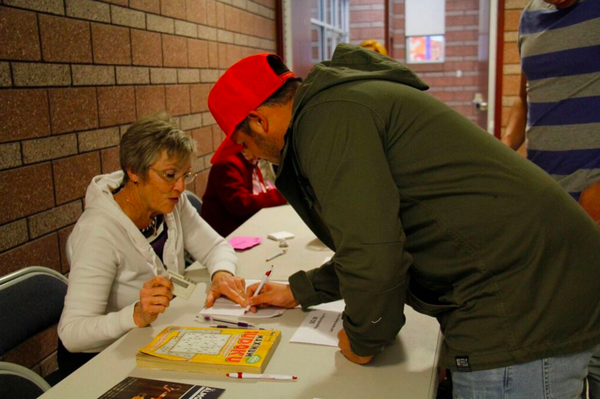 A voter participates in the Republican caucus at Dixie High School Tuesday. Photo by Jess Arruda.

Chris Cleveland, a senior social sciences major from Moab, went to the Democratic caucus at the Washington County Commission Building because he said he was “feeling the ‘Bern.’” Having delivered fliers promoting Sanders to the Shiloh Dorms and Nisson Towers on campus, Cleveland said participating in politics is every student’s responsibility.

“For the first time ever, I don’t feel like I’m just voting for the shiniest of the turds,” Cleveland said while laughing. “It’s important to vote because then you can say your voice was heard and that you had representation, even if your candidate doesn’t get in.”

College students and young people make up a fifth of voting-eligible citizens. 2016 presidential candidates have attempted to appeal to young voters in many ways, including using Snapchat, making a rap ad, and promising reduced or free college tuition.

Millie Olsen, a junior communication major from Moses Lake, Washington, attended the Republican caucus at DHS because she said she wanted to learn more about the candidates.

“A lot of young people think voting isn’t important or that their vote doesn’t matter,” Olsen said. “I hope to have a family one day, so I want to make sure whoever leads the country knows what he’s doing.”

Deja Nelson, a junior nursing major from Salt Lake City, said she voted in the Democratic caucus even though she thinks the current presidential race is “a mess.”

“A lot of students have political debates in class, and yet you don’t see them out here waiting in line in the cold wind to make sure their voice is really heard,” Nelson said. “The next president will affect our future immensely.”

The next opportunity students will have to vote will be in the final elections Nov. 8. Potential voters can register to vote at vote.utah.gov.

“This is America; [voting] is not only our right, but it’s our duty,” said Tori Baird, a senior communication major from Joseph City, Arizona. “If you’re not involved in politics — if you don’t vote — you don’t get to complain about how things in this country are going.” 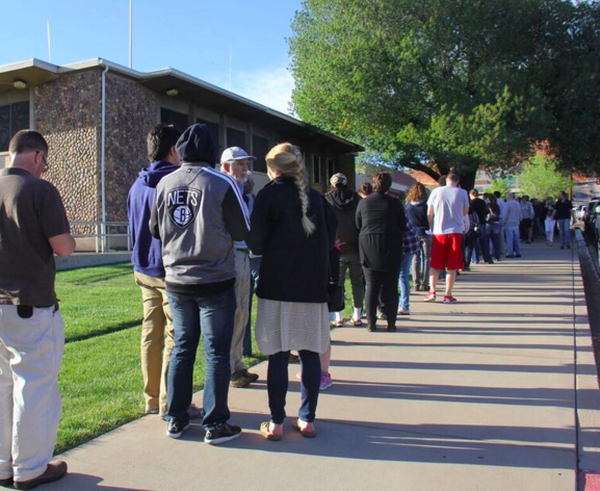 Students and community members wait in line to vote in the Democratic caucus at the Washington County Commission Building Tuesday. The long line wrapped around the block. Photo by Jess Arruda. 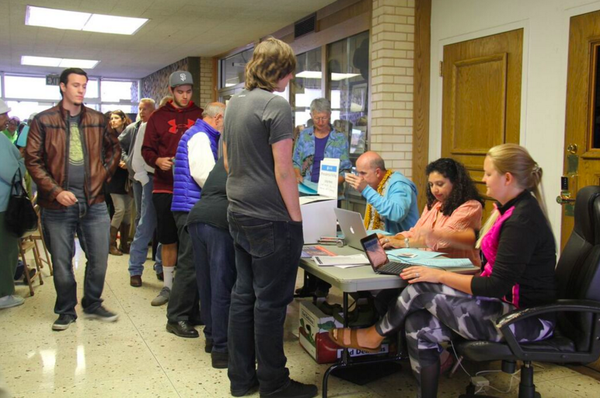 Students and community members cast their ballots at the Democratic caucus at the Washington County Commission Building Tuesday. Photo by Jess Arruda. 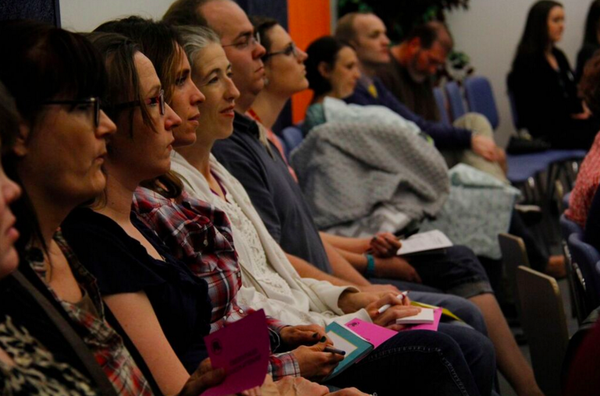 Voters listen to a GOP representative at the Republican caucus at Dixie High School Tuesday. Photo by Jess Arruda.