Mr. Dixie to compete in first ever state-wide pageant

The annual Mr. Dixie pageant has a twist: The winner will have a chance to represent Dixie State University in a big way this year.

All three are members of Raging Red, and Vandermyde said this win is a tribute to their skills as performers.

The Gardner Student Center filled with students and the contestants’ families eager to see the show. Miss Dixie 2016, Sarah Wulfenstein, a junior business major from Pahrump, Nevada, and the reigning Mr. Dixie, Matt Devore, a senior integrated studies major from Mesquite, Nevada, and student body president, commentated the event and introduced the 11 contestants. Mr. Dixie is infamous for being a spoof of the typical formality of female beauty pageants, but the stakes were higher this year.

Syrett said he is excited to compete at Mr. Utah, held at Utah Valley University, in March. He said the pressure of the opportunity to compete for Mr. Utah didn’t stress him out but definitely added to the excitement.

“There was a lot more preparation I put into it this year because there was something more than just Mr. Dixie,” O’Boyle said.

Vandermyde said while he felt there is less pressure in the Mr. Dixie pageant than in female pageants, he still felt pressure to do well, especially in the talent round.

“I was just excited to get out and perform,” Vandermyde said. “It was just a bonus that I got first runner-up.”

Syrett attributes his win at Mr. Dixie to his performance in the talent round, which was a dance routine to Beyoncé’s “Single Ladies.” He plans to bring this talent to Mr. Utah

“Thank goodness my mom blessed me with a good dancing gene,” Syrett said. “These hips do not lie.”

The added possibility of competing in Mr. Utah made the Mr. Dixie contestants more competitive.

“It just makes them want it a bit more,” Wulfenstein said.

Devore said the exposure Mr. Utah could bring to DSU is a great opportunity, not just to get DSU’s name out.

“It can tie … together all the institutions in the Utah school system,” he said.

If Syrett wins Mr. Utah, Devore said it would be a great way to remind other universities, “Dixie can bring it.”

Wulfenstein said she doesn’t expect Mr. Utah to be as formal as Miss Utah. She said she thinks it will be more of a funny event, like Mr. Dixie is, but that’s a good thing.

“I think it makes it more fun of a show when the guys are just being their goofy selves,” she said.

Syrett said he does get nervous thinking about the onstage questions and the platforms, which could be more serious on a state level.

He doesn’t want to be overconfident, but Syrett said he thinks he may have a shot against Utah’s other collegiate institutions.

“Those other schools don’t know what’s coming, so they better watch out,” Wulfenstein said. 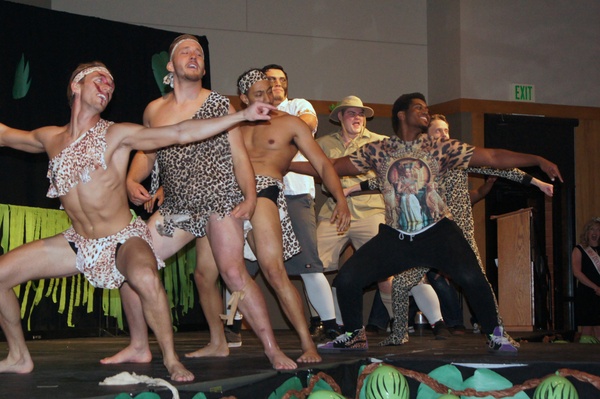 Contestants dance in the Mr. Dixie competition Feb. 24. The winner of Mr. Dixie will have the opportunity to compete in the Mr. Utah Pageant this month. Photo by Alexis Winward.