The N-Word isn’t always black and white: Speaker discusses what the N-word means across cultures 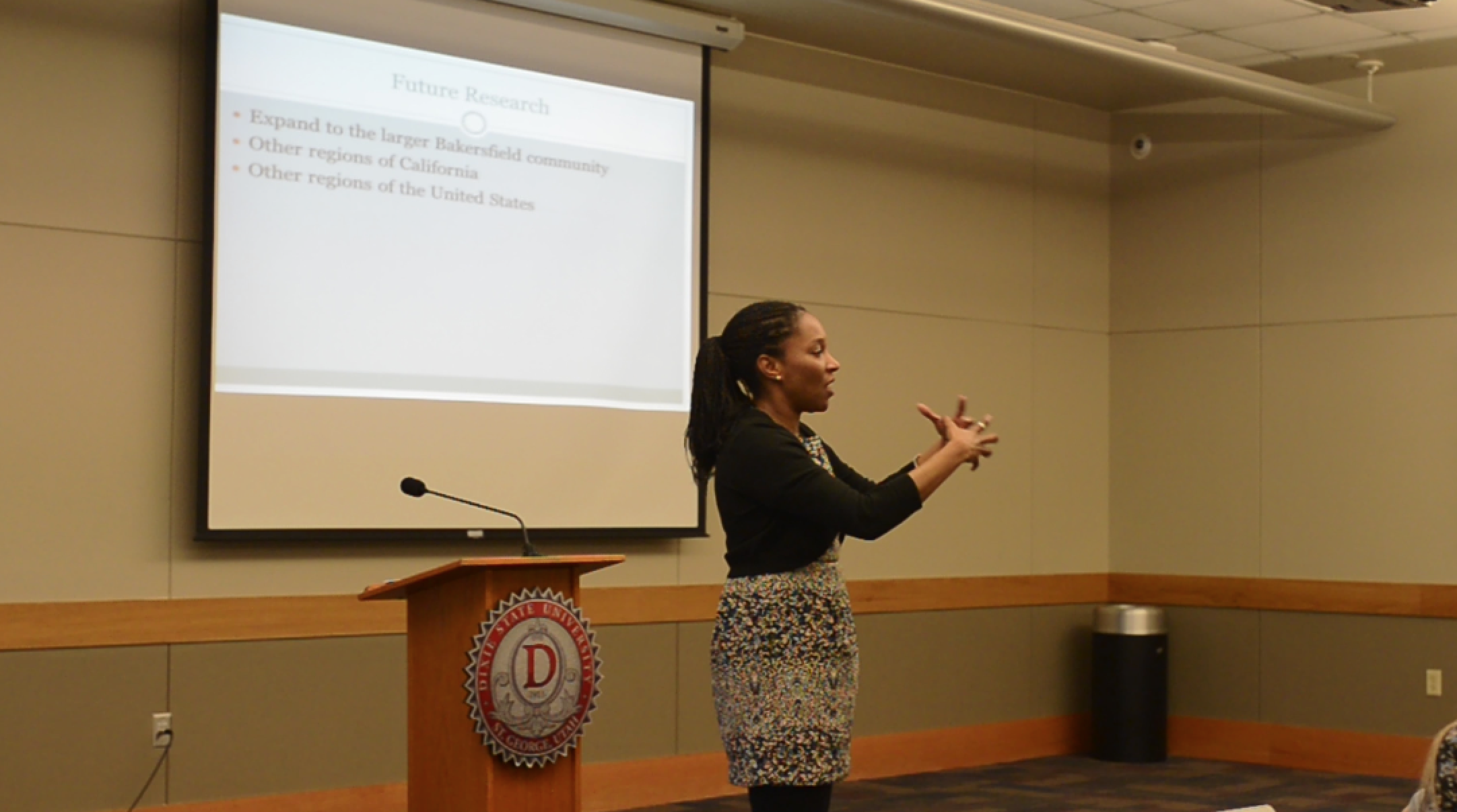 Rhonda Dugan, a sociology professor from California State University, Bakersfield, speaks at Dixie State University about society’s use, nonuse and interpretation of the N-word and how it is understood among all races at the diversity dialogue Thursday. Dugan said she usually doesn’t see racist connotations attached to the N-word at college campuses but she said she hopes to see more cultural enlightenment about the use of the N-word in the future. Photo by Austin Clark.

Although use of the N-Word may make some people cringe, the Multicultural Diversity Club’s seminar used the term as an educational tool Thursday.

Rhonda Dugan, a sociology professor from California State University, Bakersfield, was the keynote speaker at the seminar. Dugan came to DSU to talk about society’s use, nonuse and interpretation of the N-word and how it is understood among all races.

“There’s no other term that is so charged — has a heightened sense of energy when it’s been said,” Dugan said. “That’s because of its sociohistorical roots. It was a word that was used to enslave [and] to encourage violence, particularly against blacks.”

The Gardner Student Center conference room was filled with students, faculty and community members who came to listen to Dugan and ask questions. Dugan talked about her internal struggle as she listened to music and movies in popular culture where the N-word is used, and she said she wonders if it is OK to sing and hear it.

“Now, we sometimes see variations to represent other groups by adding some sort of adjective,” Dugan said. “I’ve heard the term used where you say ‘sand nigger,’ which refers to someone Arab or Middle Eastern.”

Dugan said there is a difference between two versions of the N-word – the version ending with “er” and the one ending with “a” and the perception and understanding of the people who use the term.

“Multiple races use the racial term in everyday speech, which led me to question who is allowed to say it, and does one need permission to say it?” she asked.

Dugan and her colleague, Dahna Rasmussen, who also contributes to the ongoing research of the N-word, surveyed college students at CSU-B and Bakersfield College to understand “why a diverse group of friends, not black, are being called [nigga] by people who are also not black.”

Dugan said the student respondents in her survey used the version of the N-word ending with “a” more in high school, but once they entered college and gained more knowledge, they stopped using it.

Daneka Souberbielle, director of intercultural engagement, said Dugan’s main goal of the seminar was to show there is scholarly work being done about understanding the meanings of the word.

What surprised Souberbielle the most she said was how [Dugan] educated the older generation about how the younger generation views and uses the N-word.

Morgan Miller, a senior integrated studies major from Salt Lake City, said she feels the N-word is not a bad word to be used, but not everyone should use it.

“On campus, I really don’t see a racial problem with this word — I really only see it within the black students on campus and for me that’s OK,” Miller said.

Miller said she hopes to see more cultural enlightenment about the use of the N-word and that people will understand the history of the term and where it came from.

Dugan and Rasmussen said, with more funding, they will continue their research about the use of the N-word, not just in Bakersfield, but also in other regions of California and throughout the U.S.