A former tenured theater professor charged with assault appeared in court for the first time after months of delays Wednesday.

Varlo Davenport was terminated last year because of a complaint filed by a student in one of his classes. He was accused of pulling the student’s hair and rocking her chair back and forth during an acting exercise.

“Back in August, we asked the judge to give us (the) evidence that [Dixie State University] indicated they had and the city prosecutor is supposed to have,” Davenport said. “What we got today was his answer to that motion six months later.”

The motion to see the whistleblower hotline files was granted, however Municipal Judge Ronald Read ruled they could not see emails, phone calls or memos.

Read suggested a plea in abeyance, which was offered before. Davenport indicated there was no need to respond and continue the trial.

Prisbrey said he and his client had a motion outstanding for six months the judge hadn’t ruled on regarding a file from Don Reid, DSU’s director of campus security and police, which contained relevant information for trial. Reid said he had a file box full of information based on his investigation.

“[Reid] turned that over to the city attorney’s office, they dug through it, [and] picked out what they thought was relevant,” Prisbrey said.

Reid said he had the file of complaints against Davenport but said he handed it over to the city attorney’s office.

“The judge said we could have a small portion of what we asked for, but it did not include emails, memos or all of the stuff we might need in order to prepare a defense,” Davenport said.

Davenport said he and his attorney are unsure what to bring to the courtroom because they are being kept in the dark regarding necessary evidence to create a strong defense.

“With our defense, we have witnesses who will come in, but we don’t know exactly what it is we need them to address yet,” Davenport said.

Davenport and his attorney have a right to see the above mentioned files, Reid said in a phone interview. However, neither Davenport nor Prisbrey said they have been granted access to all of them.

Prisbrey said not allowing the defense to have access to the same files is a violation of the rules of personal conduct.

“It’s hard to defend when we don’t know what we are supposed to defend,” said Varlo Davenport’s wife, Andrea Davenport.

Since Varlo Davenport and his attorney have not seen the same evidence as the university individuals involved, they have a different perception of the entire situation.

“Why wouldn’t they give [the files] to us?” Davenport said. “You want to be fair, you want to think the best of people, but to not give it to us, and then to be given the little bit we were given right at the last possible second, it starts to make you question people’s motives.”

St. George City Attorney Shawn Guzman instructed St. George city councilwoman, Michele Randall, to contact the Davenport family in an attempt to persuade Varlo Davenport to get a lawyer other than Prisbrey. Randall called the Davenport family at their home to suggest which attorney to hire. Read, however, was unaware of the situation.

“Never in my 21 years of practicing law have I had a prosecutor talk to a city council person and have her [phone my client’s home] and inform him that he should fire me and hire a public offender and take a plea,” Prisbrey said.

Prisbrey said he received confirmation from a reporter who talked to Randall and verified that a conversation took place between Guzman and Randall to carry out this action.

After discovering Randall reached out to Varlo Davenport, Prisbrey said Read wants to file another motion about the communication.

Varlo Davenport’s daughter, Zoe Davenport, asked President Biff Williams why he had not met with her father before firing him at a Future of Dixie forum last March. Williams said to her and the rest of the forum that he had met with him. Williams later corrected himself when questioned and said he never met with Varlo Davenport, but administrators had.

“(He’s) a community leader who basically calls [Zoe Davenport] a liar and lies to her face, yet no one calls [Biff] on it,” Varlo Davenport said in regard to Williams.

“I love Dixie,” Varlo Davenport said. “I love what it stands for —  or at least stood for — and I don’t think we are at our best right now.” 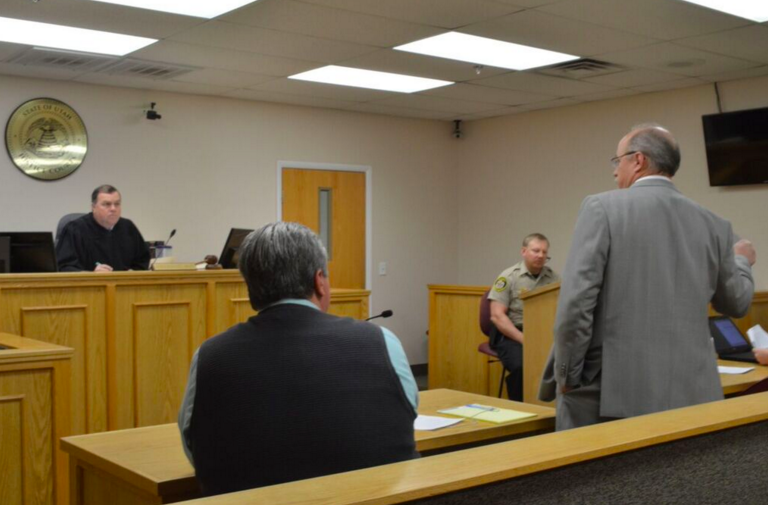 Varlo Davenport and his attorney, Aaron Prisbrey, present their case to Municipal Judge Ronald Reed Wednesday. Davenport has been fired as a theater professor from Dixie State University and charged with an assault charge after an incident in one of his acting classes. Photo by Bre Opdahl.