I was speechless until we dipped far and fast into the landscape and let out a liberating yelp. It was better than any rollercoaster plunge I’ve ever experienced.

Anxious to watch my feet dangle over the desert landscape from a couple of hundred feet in the air, I tried something new and went paragliding.

“I did not expect this good of a flight today,” paragliding instructor Jason Laughlin said. “We got super lucky with this wind, and it’s butter-smooth air right now.”

A pair of hawks flew beneath us just then and perched on part of the jagged ridge, which slightly resembled Bryce Canyon. 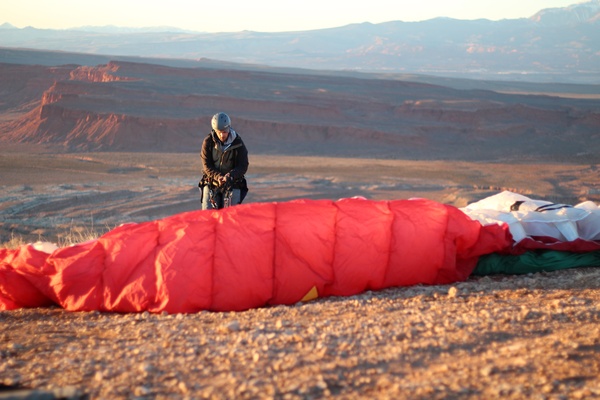 Laughlin is a certified tandem paragliding pilot and a personal friend of mine, so I called him and scheduled a flight. The problem with scheduling and paragliding is you can’t exactly schedule an exact time since the sport relies heavily on mother nature.

The original plan was for Thursday, but the wind was not cooperating. The activity had to wait.

Regardless, we headed to Hurricane late Friday afternoon to catch some wind off Laughlin’s favorite spot to fly, formally known as Honeymoon Ridge.

Laughlin’s knowledge and undivided attention for the sport was intriguing.

“You learn how to control the wing on the ground, and once you do that, you take your first early-morning flight,” Laughlin said mid-flight. “You learn how everything is controlled (and) how it works. When you become familiar with that, you can do bigger flights later in the evening when all the air is going up, like it is right now.”

For whatever reason, I anticipated paragliding to be more of a relaxing sport. After our first takeoff attempt, I realized  how wrong I was. 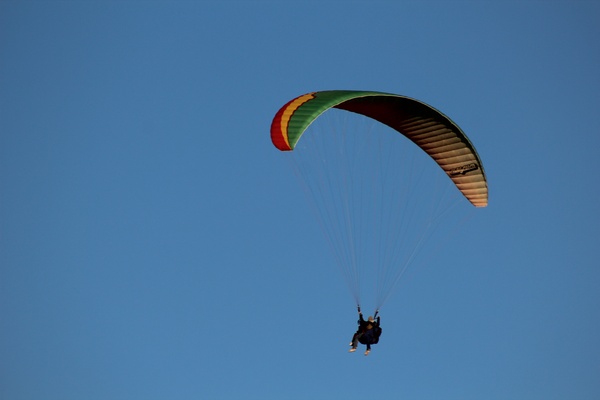 Laughlin instructed me to lean away from the pull from the parachute until it was directly above us. To do that, we put our body weight in the opposite direction from the chute as it rose with the wind. When the parachute, or wing, was in the sky, we ran off the ledge and jumped into the wind. This was hard, since my harness was giving me a serious wedgie, but I lived.

After we were airborne, Laughlin had me tuck my knees into my chest to allow the seat on my harness to slide underneath my bottom.

The adrenaline from the takeoff procedure wore off as a new adrenaline kicked in when the amazing scenery below me took my breath away.

Laughlin told me to look and lean left to steer the wing further into the beautiful basin between Colorado City and Hurricane.

We circled around the area a few more times and landed surprisingly smooth. The flight lasted 20 minutes, and I would gladly do it again.

Paragliding is an expensive investment that costs at least $4,000; however, a ride costs around $120. 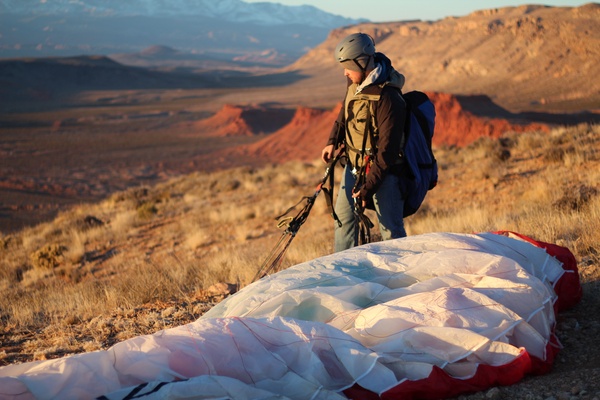 “I buy a new wing every 3-4 years, but I always get the same colors so people know it’s me,” Laughlin said.

For people like Laughlin, any amount of money is worth it because flying is an experience that has yet to be paralleled.

“It’s honestly as dangerous as you make it,” Laughlin said. “If you make smart choices and are trained to fly, you are going to have a safe and enjoyable time flying.”