Making the case for why their candidate should become the next commander in chief, representatives from several 2016 Republican presidential campaigns visited Dixie State University Saturday.

The Southern Utah GOP Straw Poll was hosted by the DSU College Republicans and the Dixie Republican Forum, and it allowed a place for community members and students to vote on their favorite candidate. Republican candidates Donald Trump, Ted Cruz, Marco Rubio, Chris Christie, Carly Fiorina and Rand Paul were all represented at the event by speakers who were each given eight minutes to speak.

Cruz won the poll with 43 votes. He was followed by Rubio with 13 votes, Trump with 5, Christie with 3 and Fiorina with 3. The results were similar to the results of the Iowa Caucus Monday, where Cruz won with 28 percent of the Republican vote, followed by Trump and Rubio.

Uriah Hernalsteen, a junior elementary education major from St. George and president of the DSU College Republicans, said he helped organize the event because it’s important for students to be informed about what’s going on in politics.

“Everyone who’s registered to vote has an opportunity to say something with their vote, which is why they should keep an eye on what’s going on politically,” Hernalsteen said.

Political rhetoric and jabs at the Democratic Party were common in many of the speeches. Willie Billings, the representative for Fiorina, said federal overreach on Utah land ownership will become a deciding part of the election in Utah.

“The only reason the feds still own so much of Utah land is because tens of thousands of Utahns haven’t stood up to them in protest yet,” Billings said. “Utahns are sick and tired of sissy leadership in the Democrats, and we want change.”

This year’s straw poll was the first one at DSU and was more of a trial run, Hernalsteen said.

“I’m hoping this will become a yearly event and that more students will show up in the future,” Hernalsteen said.

Angela Harrison, a volunteer for Utah for Cruz from Toquerville, said it was helpful for people to come to the event and hear a live speaker on behalf of the GOP candidates.

“For a lot of college students, they have so much going on in their lives that maybe politics may be the last thing they think of to spend their time on,” Harrison said. “We need millennials to be involved in politics and learn how they can make a difference.”

As a registered Democrat, McKade Christensen, a senior communication major from St. George, said he attended the event to learn more about the Republican candidates even though he wouldn’t be voting for any of them.

“Even though I disagree with a lot of the policies, I wanted to come to hear what [the Republican candidates] could offer,” Christensen said.

Christensen said it especially scared him when the representative for Rand Paul spoke on wanting to end the National Security Agency’s surveillance on Americans because “the NSA has caught a lot of bad things that would have happened by using domestic surveillance.”

“I think it’s really important to voice our opinion, to become well informed, (and) to really know what the issues are about instead of just relying on what we were raised off of or what our grandparents think,” Christensen said. “We need to have our own well-informed opinion on what the facts are.” 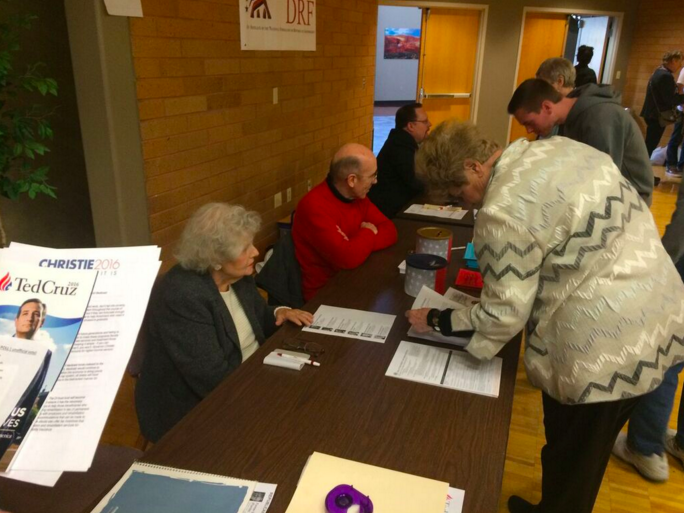 Students and community members fill in their ballots at the Southern Utah GOP Straw Poll Saturday. Ted Cruz won the most votes at the event. Photo by Spencer Ricks.