Although the Muslim community in St. George is relatively small, many Muslims have found a haven at Dixie State University.

Darrouza led the weekly prayer in the North Instructional Building Friday with a group of about 20 other community members, students and faculty who are Muslim.

Praying and affiliating with other Muslims in St. George is something they have only been able to do since March 2015 when Darrouza and other students specifically asked DSU administrators for a prayer space on campus. They were given room 125 of the North Instructional Building as a prayer space, which is used for yoga classes Mondays through Thursdays.

Faheedat Ayoola, a junior nursing major from Osun, Nigeria, was among the students who asked for the prayer space last year. She said she began asking for a prayer room in fall of 2014.

“I really like the efforts of the [DSU administrators] in giving us the prayer spot,” Ayoola said. “It’s been a selling point for Dixie. We can go out and tell our friends, ‘Dixie does have a prayer spot.’”

Muslims in St. George needed to travel to a small mosque in Cedar City each week to pray with other Muslims before the prayer room at DSU was aside.

People removed their shoes and kneeled on prayer rugs facing the east toward Mecca, Saudi Arabia — the heart of Islam — at the weekly prayer Friday. Darrouza read the story of Jonah using passages from the Quran and spoke on the importance of patience, repentance and praising Allah — the Arabic name for God.

“They’re not very many Muslims in St. George, but it’s nice to have a place to pray and socialize with other Muslims,” Darrouza said.

Because many of St. George’s residents are religious, Darrouza said the people here have been “peaceful” and “accepting” toward Muslims, even though many may not understand their culture.

Ayoola said some students have asked questions about why she covered her head with a hijab, but most were supportive and understanding.

“[In Nigeria] I wear my hijab so I don’t get assaulted,” Ayoola said. “Here at Dixie, if people say I’m a terrorist because of the way I dress, I stand strong and let them know I am not a terrorist.”

More efforts are being made to help Muslims feel more comfortable on campus, said Daneka Souberbielle, director of intercultural engagement. Souberbielle said she is working with the Multicultural and Diversity Center to provide activities for students who are Muslim during the summer for Ramadan — a month of fasting observed by Muslims.

“Many of the Muslim students are international students, so they stay on campus year-round,” Souberbielle said. “This year, we’re really going to be focusing on supporting them through Ramadan. Fasting for 30 days can get pretty intense.”

Shadman Bashir, a visiting professor who is Muslim, said Utah as a whole has been more accepting of Muslims than other states.

Utah Gov. Gary Herbert was the only Republican governor to continue welcoming Syrian refugees after the November terrorist attacks in Paris. And the LDS Church, Utah’s predominant religion, made a statement upholding its position on religious liberties after Trump made his call to ban all Muslims from entering the U.S. in December.

“It has taken our country 200 years to reach this point as far as religious freedom and tolerance goes,” Bashir said. “It would be a huge step back in our society if people start to no longer welcome people based on their religion.”

Bashir said when he first heard about the shooting in San Bernardino, California, in which 14 people were killed and 22 were injured Dec. 2, he was up until 3 a.m. trying to find out what happened with a “sunken heart for the victims.”

“I immediately hoped the perpetrator wasn’t a Muslim,” Bashir said. “I knew if he was, it could be a huge loss for Muslims in this country.”

Married couple Syed Farook and Tashfeen Malik were identified as the killers in the San Bernardino attack. Both were Muslim and are thought to have been motivated by extremist ideals.

“Islam is a peaceful religion, and it’s the bad guys that mess it up for the rest of us,” Bashir said.

Darrouza said anyone who is interested in learning more about Muslim culture in St. George is welcome to visit the weekly prayers on Fridays at 2 p.m. in room 125 of the North Instructional Building.

“The U.S. is the best country in the world for religions and tolerance,” Darrouza said. “We are glad to be here.” 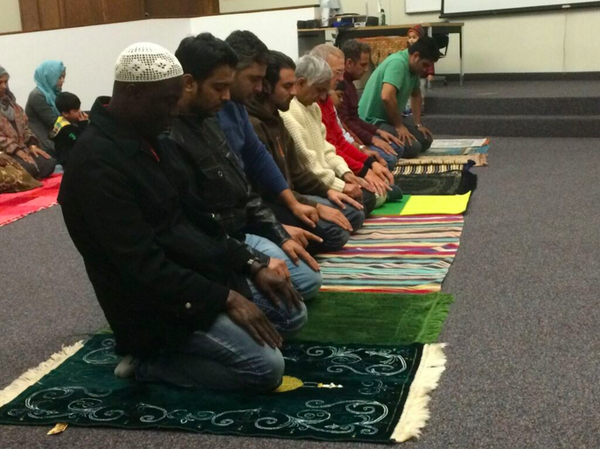