Community involvement and the transformation of St. George into a “college town” was the focus at the “Direction of Dixie” forum Tuesday.

President Biff Williams spoke in front of an audience composed mostly of students about the strategic plan, “Dixie 2020: Status to Stature,” and how it pertains to students. Williams mentioned some of the projects in the works for Dixie State University, including a bigger student success center, the upcoming Human Performance Building, and the renovations to DSU’s athletic complexes.

Williams said one of the most important goals in “Dixie 2020” is to increase opportunities for students.

“We want to attract students to [DSU] so we’re the No.1 destination for students in Utah,” Williams said. “Whether you’re a brainiac or if you’re like me and a little more challenged when it comes to academics, we want [DSU] to be the place for all kinds of students.”

Increasing student enrollment at DSU to 12,500 within the next five years is one of the goals outlined in “Dixie 2020,” Williams said. He said he wants to increase the number of ethnically-diverse students at DSU to increase to 30 percent, with five percent of DSU’s total enrollment to be international students.

Once completed, the new Hansen Stadium will be an ideal place for all kinds of community events including community athletic games, commencements and conferences once the renovations are completed, Williams said.

“The new Hansen Stadium will be the most recognizable building on campus,” Williams said. “When people drive by on [Interstate 15] and see our stadium, they’ll want to learn more about DSU. It’ll be a great marketing tool in getting people to campus and engaging with DSU. 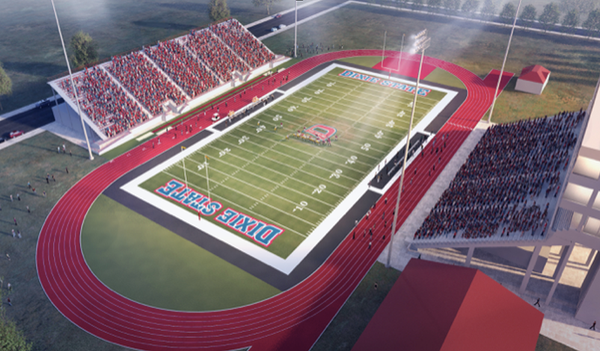 An artist’s rendering shows what the new Hansen Stadium may look like once renovations are completed. President Biff Williams said he wants the new stadium to be used for all kinds of community events including community athletic games, commencements and conferences.

Williams said he also wants to make St. George a “college town” by displaying identifiable DSU logos across the community.

“We want people with a (Southern Utah University) ’T-bird’ bumper sticker on their car to feel uncomfortable when they come to St. George because of all the pride for DSU in this community,” Williams said, evoking a laugh from the audience.

Part of increasing school spirit and pride is creating a new mascot students, faculty, alumni and community members can all identify with, Williams said. An identity committee has been looking for ideas for a new mascot for DSU, which the public will be able to voice their opinion on for an upcoming survey within the month.

“I want DSU to donate one million and five hours just so I can say we beat Indiana State,” Williams said.

Williams’ also announced several new women’s sports that are being added, including sand volleyball, track and field, and lacrosse. New sports’ complexes like a new soccer stadium and softball field are also in the works, Williams said.

Dean of Students Del Beatty said students can help DSU with the goals outlined in the strategic plan by becoming more involved.

“Tell your friends, your family, neighbors and everyone else you meet about all the awesome changes coming to [DSU] and why they should come here,” Beatty said. “The more students that come to [DSU], the more we can accomplish.”

Williams said the key to improving and growing DSU is momentum.

“We need to take what we have now, build on that and keep it going,” Williams said. “Keeping the momentum going is the key to our future.”