Warren Anderson, vice president of academics and a senior accounting major from Santa Clara, said Political Involvement Week’s events are designed to inform students and let them know why politics are important.

Cox said the millennial generation is less likely to participate in the political arena than any other generation that has come before it. Millennials are more willing to volunteer their time for a good cause, Cox said.

Partisanship is a large reason why individuals shy away from politics, and part of the way that can be fixed is simply by getting involved, Cox said.

“This is where I desperately need your help,” Cox said. “Voting is the least you can do.”

In addition to Cox’s speech, a free breakfast kicked off Political Involvement Week Monday, students were invited to register to vote at a booth Tuesday, and a political comedian visited campus Wednesday night. Anderson said he was pleased with turn out throughout the week. 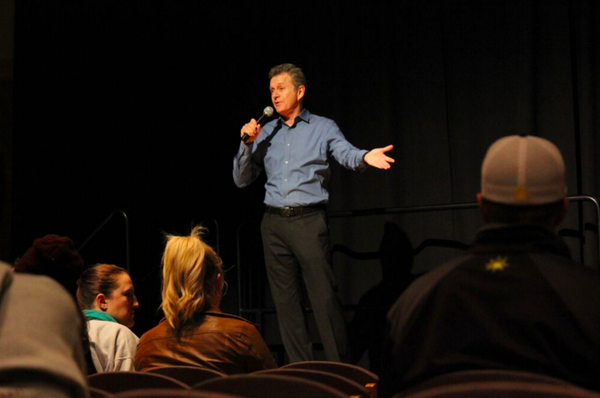 Political Comedian Scott Blakeman cracks a joke to students on Wednesday as part of Political Involvement Week. The week featured different events to get students interesting in politics, voting and current events.

“I hope there’s more awareness and desire to stay involved and learn about the candidates and what’s going on in the world,” Anderson said.

“Voting is down in the nation, and it’s important to spread more awareness,” Hess said. “People are upset with politicians who get voted into office, but there’s only a small percent of people in America who vote.”

Utah is among the bottom 5 percent in the nation for voter turn out, and only 18 percent of registered voters in St. George voted in this year’s election, Cox said. According to The United States Elections Project, an on-going study about voter turnout, Utah had the third-lowest voter turnout in the nation in 2014.

Although he wasn’t expecting many students to show up to his speech, Cox said he was pleased with the amount of students who came. Cox said he oversees elections in the state, and works as a team with the governor on issues like education and healthcare.

People gravitate toward news and information that affirms their beliefs, Cox said. To become more well-rounded and knowledgeable, he said individuals should seek out news sources that don’t affirm their world views.

“I want you to imagine for just a second you might be wrong,” he said. “Don’t ever be so sure of yourself.”

Cox said young people who are involved are key in improving the country and state, and he encourages people to reach out to their political leaders even through social media.

“You really can make a difference, and your voice matters,” he said. “Political leaders in the state of Utah will listen to you if you reach out to them.” 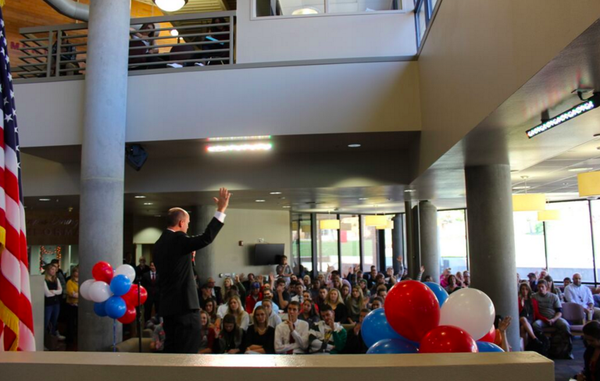 The Gardner Center lounge was overfilling with audience members at Lieutenant Governor Spencer Cox’s speech Thursday. Cox spoke on how and why students should be more involved in politics.