The first annual DSU Zombie Walk was presented by the criminal justice club, sustainability club and science fiction fantasy club. Many participants dressed in tattered clothing and were covered in fake latex wounds and theatrical blood applied by makeup artists. The suggested admission price was $10 worth of supplies to be donated to local animal shelters and animal rescue groups.

“I love Halloween, and I get really into it each year,” Cantrell said.

Wearing a ragged suit and caked in zombie-themed makeup, Cantrell said he was happy with how the event turned out despite the short notice he had to plan and advertise it.

“Overall, it was well attended and we received a lot of donations,” he said.

The zombies started their stroll outside the Jeffery R. Holland Centennial Commons and walked through the south encampment mall, moaning and dragging their feet. The community youth soccer games in the encampment mall didn’t slow the hoard of zombies.

“I took an anti-drug approach — running up to kids at the soccer games and telling them if they did drugs, they’d look like me,” said Jeff Meacham, a senior information technology major from St George. “That sounds kind of creepy, but it was fun.”

Meacham wore four layers of makeup on his face and blackened his teeth with food dye to win the honor of “first place zombie” at the event.

Cantrell said he estimated they received over $400 in donations for animal shelters. Some of the supplies donated included pet food, dog beds, leashes and pet toys. The bulk of the donations came from Orgill, a manufacturing company in Hurricane.

The donations went to the Homeless Animal Rescue Team and Providing Animals With Support, a nonprofit that works to provide homeless animals with homes.

“We’re grateful for the help and donations [from the Zombie Walk],” said Tevin Freitas, a volunteer for HART. “All the donations will be given to help dogs in need.”

Organizers of the event said they hope to continue the Zombie Walk each year and to increase attendance and participation. Tracey O’Kelly, a paraprofessional in the DSU library and advisor for the sustainability club, said she wants the Zombie Walk to become an annual tradition at DSU.

“I want all the students to come out, get into it, and really go ‘zombing’ around campus next year,” she said.

As for administration’s current search for a new mascot for DSU, Meacham said he had a suggestion for them to consider. 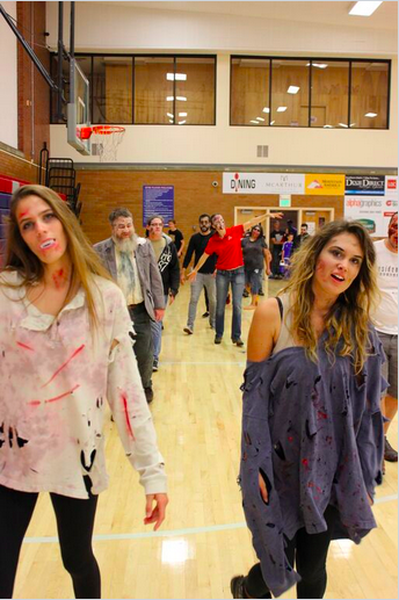