Eclectic lamps, rice crispy treats, and laid-back music all have at least one thing in common— lamp fest.

This semester, Big Brothers Big Sisters of America was the organization of choice.

A different organization is chosen each semester, and this lamp fest was especially important for Sarah Beacco, youth support service leader and a junior integrated studies major from St. George, because she deals with organizations that specifically benefit the youth in St. George.

“Lamp fest is a great way to bring awareness to students on campus,” Beacco said. “Big Brothers Big Sisters is a great organization where students our age can really make an impact in the community and help children who need someone to look up to.”

Shaelie Knutson, a DSU alumna and mentor at Big Brothers Big Sisters, said there is an extreme need for mentors in the St. George area. She brought her “little” on stage with her and said how much being a big sister has changed her life.

“My little mentors me more than I mentor her,” she said.

A donation jar was passed around the crowd as several bands played. Refreshments were served while students mingled in the amphitheater under the dim light of several lamps.

Dillon McKinney, vice president of service for DSUSA and a junior math major from St. George, said lamp fest was started by a student about five years ago as a way to raise money for local charities while also creating a laid-back feel.

McKinney said Knutson approached the service branch and asked if the concert could raise funds for Big Brothers Big Sisters.

“We were happy to oblige because it creates a better relationship between the organization and the university while helping children out and helping to give them what they need,” he said.

Although there was some confusion at first about what lamp fest actually was, McKinney said its turnout has been steadily growing each year.

Thomas Anderson, a local musician who played a ukulele and sang at this year’s lamp fest, said when he was approached by Beacco and asked to play, he said yes because he wanted to support the cause.

“I love playing music, and I love supporting the cause here,” Anderson said. “It’s great performing at the college. It’s a great atmosphere, and it’s a lot of fun.”

McKinney said although the event is fun and meant to entertain students, it’s truly more about the charity.

“For me, it means that we can still have fun, but we can also do good in the world,” he said. 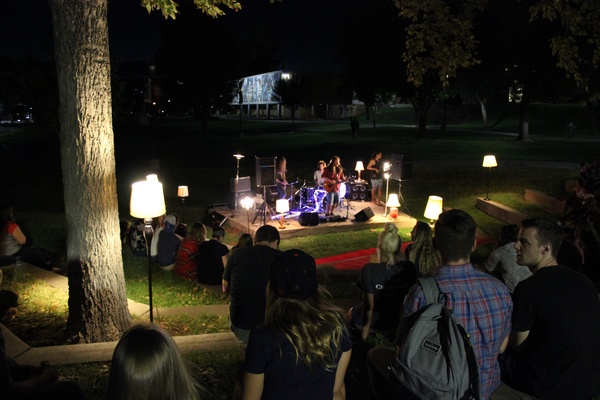